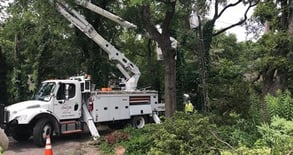 Led by Brad Evans (Senior Territory Manger), Kathy Mozingo (Senior Key Account Specialist), and Dave Stewart (Load Planner), material started moving and the first truck arrived at 11PM on Sunday.  Trucks were shipped throughout the week with the last truck arriving on Thursday to replenish storm stock that had been depleted. Evans worked alongside Oncor directly from their Trinity command center, meticulously working through material needs and storm orders.

Coler D. Snelleman, the Director of Strategic Sourcing at Oncor Electric Delivery stated “We could not have reacted as quickly as we did without team support. Thank you for the impact Hubbell made and restoring power this week. Thank you for your team and everything you do.”

By Wednesday, June 12, 2019, Oncor crews and partners restored power to more than 340,000 customers impacted by the severe storms and continued working on restoring power to areas with the most extensive damage.

Gerben Bakker, Group President of Hubbell Power Systems, Inc. stated “I thank everybody that stood out as they always do. It’s really what sets us apart from anyone else in this industry. It’s the great people that we have that are such believers in what we do, and rally not only every day, but especially in times like these.”

Hubbell Power Systems is a proud member of the Hubbell family. Click to learn more.